"A Wrinkle In Time" In 90 Seconds from James Kennedy on Vimeo.

The 90-Second Newbery Film Festival is a video contest in which filmmakers of any age make a movie of an entire Newbery Award winner in 90 seconds or less.

The Newbery Medal, named for eighteenth-century British bookseller John Newbery, is awarded annually to the author of the most distinguished contribution to American literature for children.

Festival creator James Kennedy has found that any book, no matter how worthy and serious, becomes "pleasingly ludicrous" when condensed to 90 seconds.  And, according to the rules, the whole plot must be dramatized, no book trailers or video book reports.

Now in its third year, the film festival has become greatly successful with annual screenings at the public libraries in New York City, Chicago, San Francisco, Portland, Tacoma and more.

The rules are pretty simple:

James has a wonderful section of his website that goes into great depth about the festival.
He's also created a helpful guide that provides you with tips and tricks for making a 90-second video.  You can also find a page dedicated to successful Newbery videos that will hopefully provide some inspiration.

Don't take too long to just think about this project though; the deadline for this contest is December 10, 2013.
Posted by YA Department @ the East Islip Public Library at 12:00 AM No comments: 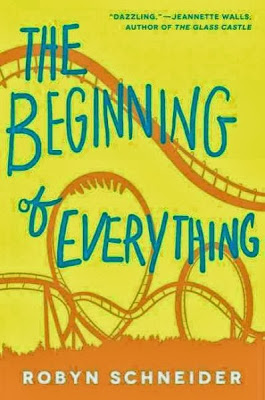 The Beginning of Everything
by Robyn Schneider

Ezra Faulkner has been on the upward social spiral since middle school.  Star athlete and prom king, Ezra believes his senior year will be his best yet , until a devastating car accident changes his entire future.  No longer an athlete, let alone a star athlete, the looks he gets in the hallway have changed from envy to pity and Ezra is not sure how he will make it through a whole year.  As he struggles with his new identity,  Ezra reconnects with an old friend and forges an unexpected bond with eccentric newcomer, Cassidy Thorpe.

The Beginning of Everything is filled with humor, honesty and heart; and it is not your classic boy-meets-girl novel.  Fans of John Green and The Perks of Being a Wallflower will enjoy this story about how difficult it is to play the part that people expect and how new beginnings can stem from  tragic endings.

Posted by YA Department @ the East Islip Public Library at 12:05 PM No comments: