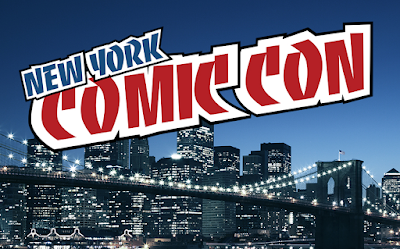 East Islip teen, Johnathan Y. was fortunate to obtain a press pass for NYCC 2016.  Below is his review of the day and the backstage access his pass allowed.

Comic Con 2016 is here, and it's time to sit back, relax, and enjoy everything going on at the Javits Center.  Maybe a little bit less on the relax part, since there's so much to do here and it almost seems like it's impossible to go and do everything you're going to want to do.  Like me for instance!  Day on of Comic Con, I expected to walk around, visit some panels, and just take it slow.  Before any of that, I knew I had an appointment over at Shop Studios to have some fun with Square Enix.  I expected to be there for maybe an hour, tops?  Instead, three hours later, I'm only just leaving what was some of the most fun I've had at NYCC in my short time of going here.  So what did I spend three hours doing?  Well, I sampled a bit of the new VR coming for The Rise of the Tomb Raider, I hung around and interviewed a couple of representatives from Hitman, got my first taste ever of both Deus Ex: Mankind Divided and Final Fantasy XV, and finished off with Kingdom Hearts 2.8.

Let's start off with what I did first: The Rise of the Tomb Raider.  For anyone who owns a PS4, we all know the struggle of this game.  Microsoft was given an exclusive deal and so us SONY faithful have had to wait a full year to finally get our hands on it.  Now, I only got to play some of the DLC - Blood Ties - but within the half hour I played, I had a blast.  This is both a recommendation for both Tomb Raider and Playstation VR.  Starting up on the game, I will admit that the first mode I played wound up leaving me feeling dizzy.  Sitting down and controlling the character walking is...tough.  Luckily, there's another mode within the game where you're able to teleport Lara place to place, and once I got the hang of it I was flying all over the board.

Blood Ties focuses on Croft Manor, which is about to be stripped away from Lara due to issues with the actual claim of the property.  Lara refuses to let that happen though, so she has to go on a hunt throughout the Manor and find the paperwork for the home.  Within the 30 minutes I played, I can say this much: the exploration, the puzzles, everything you enjoyed about the first game is back in Rise.  I didn't get to finish the mode due to time constraints, but there's a reason that this was one of my most anticipated games of 2016.

My next stop was Hitman, which you can read more about in a future article including the interviews with the lead writer,  Michael Vogt and Global Brand representative Sven Liebold.  So instead, let's just jump to Deus Ex: Mankind Divided.  I've never played Human Revolution, so I didn't know what to expect walking right into Mankind Divided.  What I can say though is that the future content coming for this game has me excited for whatever I do decide to go and play through the game.  A whole bunch of levels are being added to the Breach mode, a new DLC is coming out featuring an old character from the first game, and an estimated arrival for the second story related expansion.  I did get to play a bit of Mankind Divided, and for those familiar with the game you know just how fun it is.  For my first time, I almost didn't want to put it down.  It plays easy and it was an enjoyable and challenging experience.

This is going to pain me to say and probably pain you to read, but I have never played a Final Fantasy game.  The franchise had always interested me but I never got around to trying out the games.  So I made it  a point to give Final Fantasy XV a try while I had the chance.  I was given the chance to play the first four chapters of the game which, for the sake of time, I was able to complete.  I dug in for about an hour and here's what I can say: the combat system is very intense.  there was a lot thrown at me in the tutorial but once I began to pick up on it, the game just started to feel so smooth.  Another thing, the graphics are insane, just truly beautiful.  It's one of the best looking games I've seen so far.  The chances of me picking this up and giving it a try are probably as high as they've ever been.

And finally, I wrapped up with Kingdom Hearts 2.8.  One of the first story-based games I wrapped myself into was Kingdom Hearts.  The lore was intriguing, the characters were fun, and it wasn't overly complicated.  Did I finish the game though?  Yea.  In fact, all I know is the controls felt the same and it was fun hitting the Heartless with a magical key again.  Otherwise, there's not a whole lot I can say.  I will be picking this up soon, so for anyone who's been a fan of the lore and the games, this will be something you'll want to acquire.

All in all, my experience with Square Enix at Shop Studios has been a highlight for me and the perfect way to start off New York Comic Con.  If you get the chance, test out these games for yourself.  You certainly won't be disappointed.

Truly comic con was an amazing experience for myself a 12 year old boy with his family we all cosplayed and enjoyed the fun in that some of the cosplay was quite amazing the spirit of the day was fun and adventure.  But what I'd like to make sure to mention one can still find comics in all different genres Disney had a great booth that was dedicate just to books new editions plus old favorites the line was wrapped around the corner I waited with anticipation for the new Gravity Falls journal #3 would I go back waiting on the long lines getting through the large crows, you bet!

Thanks, Johnathan; looks like you had a great time!
Posted by YA Department @ the East Islip Public Library at 12:00 AM No comments: Students, grades 5-12, are invited to participate in a writing contest.  Using any of Adam's books, students must write an alternate ending between 500 and 750 words.  Essays will be divided into two groups (grades 5-8 and grades 9-12), judged upon originality and creativity and must be submitted to Mrs. Ware at the East Islip Middle School or Mrs. Worst at the East Islip Public Library no later than Monday, November 28.

Two winners, one from each group, will be announced on Monday, December 5 and will get to dine with Adam Gidwitz, at Shandon Court, on December 8 at 4pm.  Winners will be responsible for their own transportation; meal will be provided.

Essays should include student's name, phone number and grade.
Posted by YA Department @ the East Islip Public Library at 12:00 AM No comments: